How Gaffers Use SHOWRUNNER On Set To Manage Virtual & Physical Lights

IoT, or the Internet of Things, has changed how we can do all sorts of things.

You can ask Alexa to play your favorite Luis Fonsi song, or turn on the lights in your house. Your doorbell can have a camera that beams video to your smartphone, so you can see who's knocking.

As we've watched the rise of IoT, we've asked ourselves again and again: how can this technology help us do our job as filmmakers?

In filmmaking, time is money. So if a film studio could use IoT to run like a smart home, it could save a lot of time and headaches.

We've learned from personal experience that asking Alexa to pop on some Beyonce to get actors in the mood isn't... a timesaver. But by applying IoT to filmmaking in other ways, we've learned a lot about how to make production go more smoothly. Especially when it comes to the folks managing lighting on set: 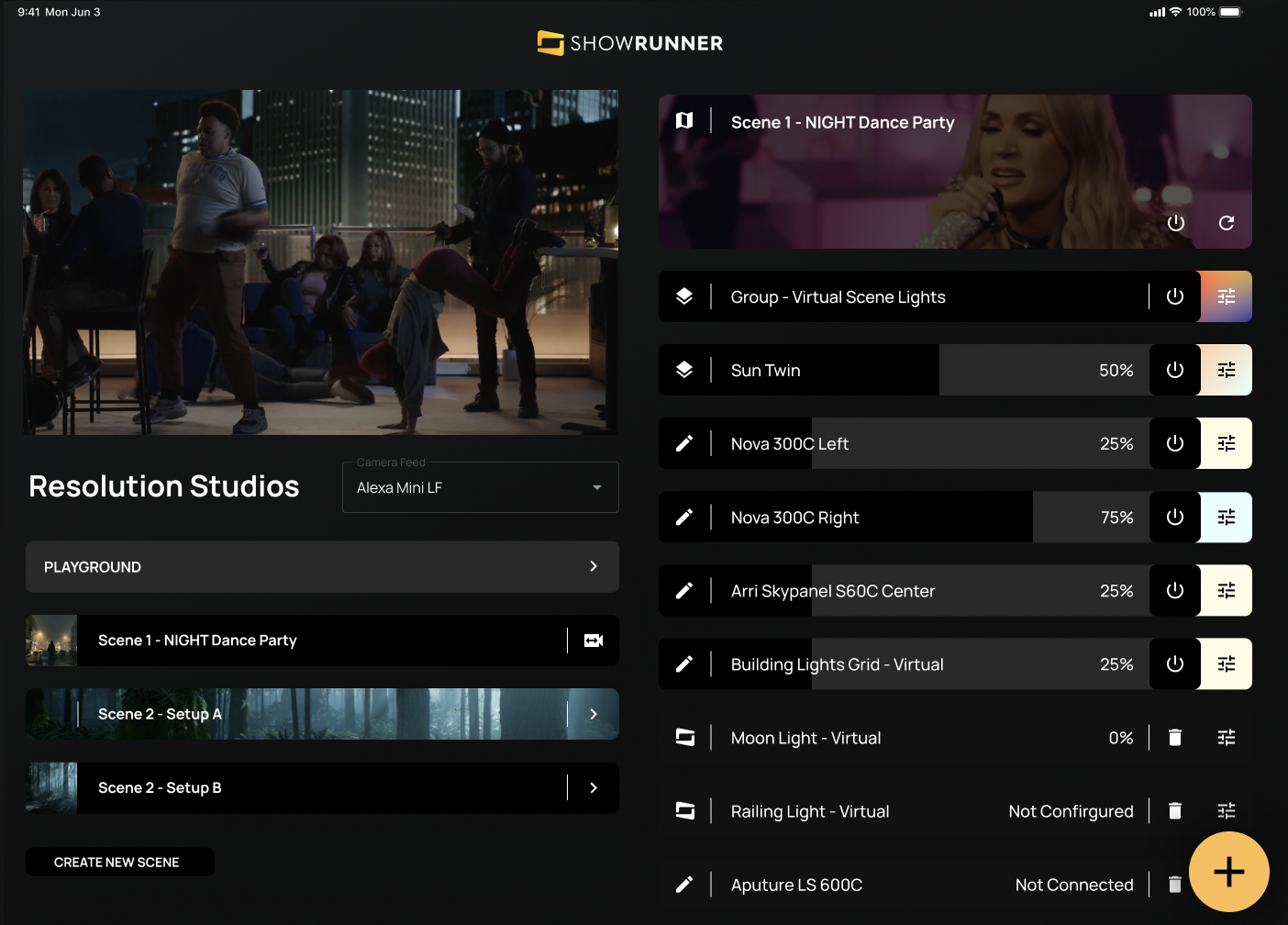 SHOWRUNNER is a toolkit we built to help you run a film set like a smart home. In particular, SHOWRUNNER helps camera and lighting crews manage all types of devices, like physical and virtual lights, from any smartphone or tablet.

On the face of it, this might not sound groundbreaking. But gaffers will recognize the power of having "virtual lights" and no cables as part of this deal. Until now, the only way to change lighting in virtual production has been to have a coder alter settings in a physics engine console. (And if your eyes just glazed over reading that, you now know why the ability to operate virtual lights from a smartphone is a big deal!)

How Physical Lights Are Normally Managed on Film Sets 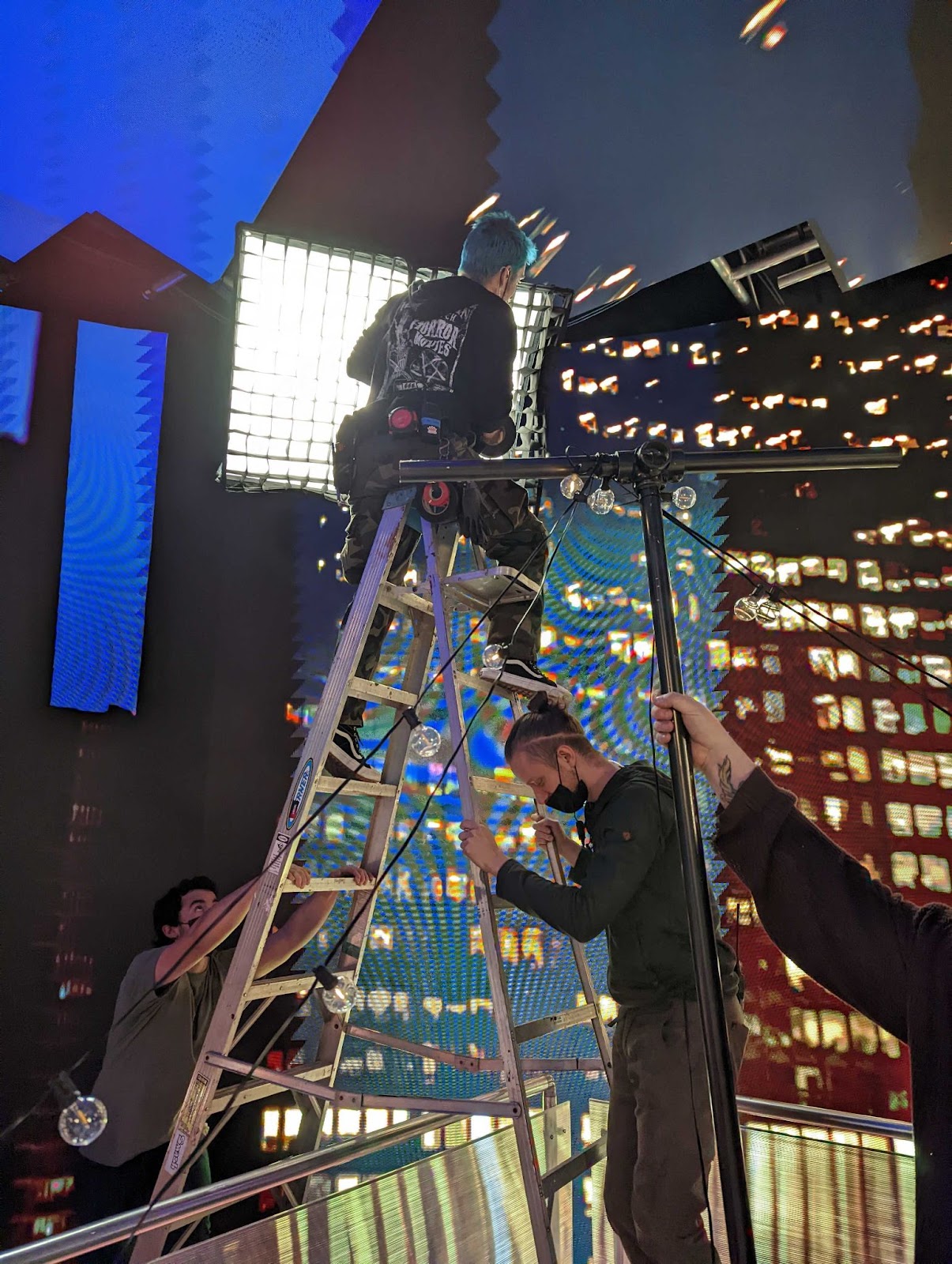 If the lights are easily accessible, it isn't a huge inconvenience. But it becomes a pain if the lights are high up on C-stands or hanging from the ceiling. And moving a ladder may seem like a small task if you only have to do it once or twice.

It adds up to precious time and reduced productivity.

Of course, newer lights these days come with apps that let you control them remotely. The problem is, rarely will a shoot involve just one brand of light.

If you have five brands of lights on set, you'll need an app for every brand, each with different user interfaces.

Individuals in charge of controlling the lights would need to learn how to use (and then juggle) all five apps. And chances are good those five apps will vary for each production. Depending on how the responsibilities get divvied up, the people who need to learn all these apps might include the director of photography, gaffer, and multiple electricians.

How Physical Lights Are Managed With SHOWRUNNER

SHOWRUNNER's lighting tool is like a mega-app that lets you control all lighting brands from the same interface.

Below, you can see three different brands of lights (and a fog machine!) all controlled from one tablet interface:

How Virtual Lights Are Normally Managed On Film Sets

Virtual production, using LED walls as scene backgrounds, is an emerging technology. Filmmakers are still settling on the best way to accomplish things. So even with good preparation ahead of a shoot, filmmakers often want small changes to their virtual backgrounds once they see their set decoration and actors in front of their LED walls.

The most common adjustments: the brightness, intensity, color, and direction of virtual lights that show up in the background.

Currently, the typical workflow for adjusting a virtual light is this: the Director of Photography (DP) will ask the Unreal Engine (UE, the most common virtual production physics rendering engine right now) operator to make an adjustment to the virtual lights. They'll go back and forth until the DP is satisfied.

The UE operator needs a desktop PC with a beefy GPU, so they are likely to be set up in an out-of-the-way spot that's not convenient for communicating with the DP. Here's a snapshot of the UE operator's station on a recent shoot that used SHOWRUNNER: 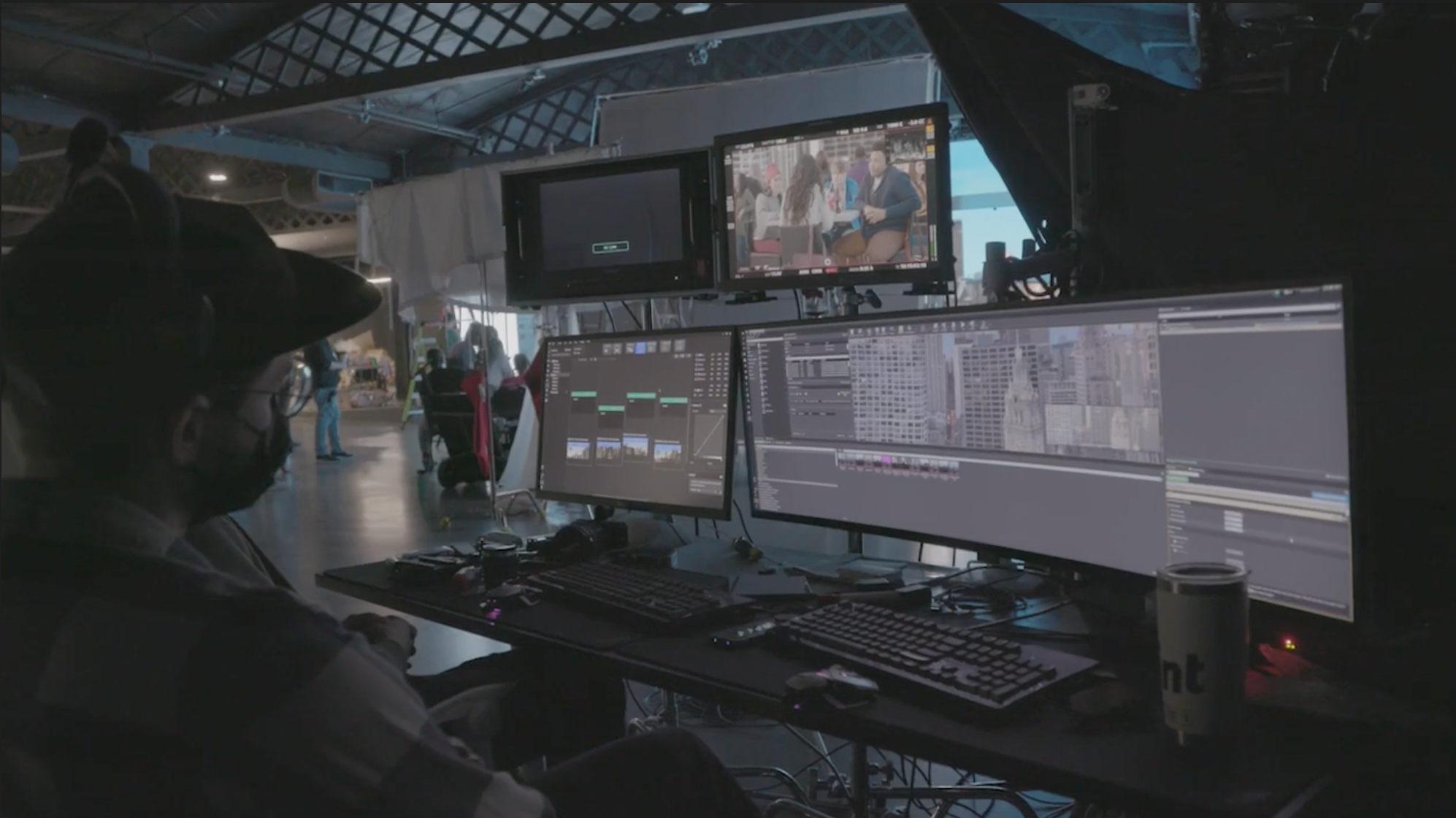 In the typical virtual production lighting process, the Gaffer, the seasoned lighting expert who is responsible for the rest of the lights the set, sits out while the UE operator does mysterious-looking computer stuff on a computer setup that looks like that crazy picture above this paragraph.

Meanwhile, when the UE operator is adjusting lights over and over, they're not able to work on the technical aspects of their job—the things that they're most seasoned in.

How Virtual Lights Are Managed With SHOWRUNNER

SHOWRUNNER's app plugs into UE and lets you adjust virtual light settings, such as the dimmer and temperature, directly from the same tablet or smartphone that you control physical lights with.

This allows the Gaffer to adjust all the lights on their set, and cuts out back and forth between the DP and UE operator, ultimately saving substantial time and money. It allows the lighting experts and the UE experts to do the jobs they're best at—in parallel.

The GIF below shows a gaffer using the SHOWRUNNER tablet app to adjust a virtual background light—in this case, the sun:

A Monitor Is Always With You As You Make Lighting Adjustments

Normally on a film set, when the gaffer makes an adjustment to a light, they're sending someone over to make a manual adjustment, while someone else looks in a monitor to see if it looks right yet. They'll call back and forth—"turn it to 3200... OK, try 3000?"—because the person adjusting the light can't see what the result looks like in-camera. To help, SHOWRUNNER pipes the camera feed into the tablet or smartphone you're using to adjust the lights, allowing a gaffer or electrician to check the results in real time as they're adjusting lights—from the same app. 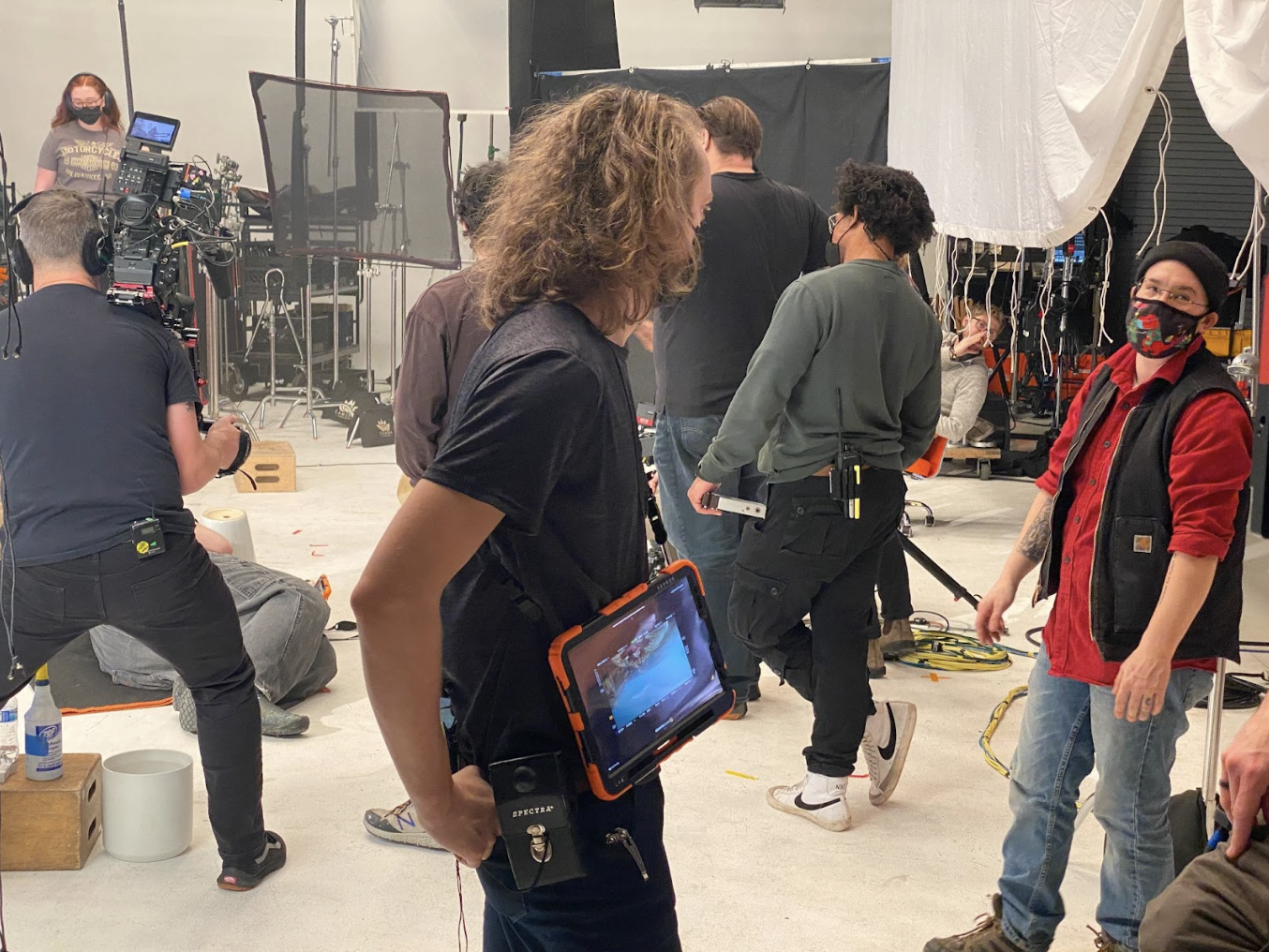 The One Thing We Wish SHOWRUNNER Could Do For Gaffers

Unfortunately, the SHOWRUNNER app can only command lights to change the type of light that comes out of them; if your lights are not on robot arms, somebody is going to have to physically move them around if you want them in a different spot. (This isn't the case with virtual lights, of course!)

So while SHOWRUNNER can change lighting settings, you'll still need a person to physically change a light's angle, set up flags, or adjust barn doors.

The good news, though, is with the live camera monitor on your tablet, anyone who's doing manual lighting moves can see how those physical adjustments are affecting the final image 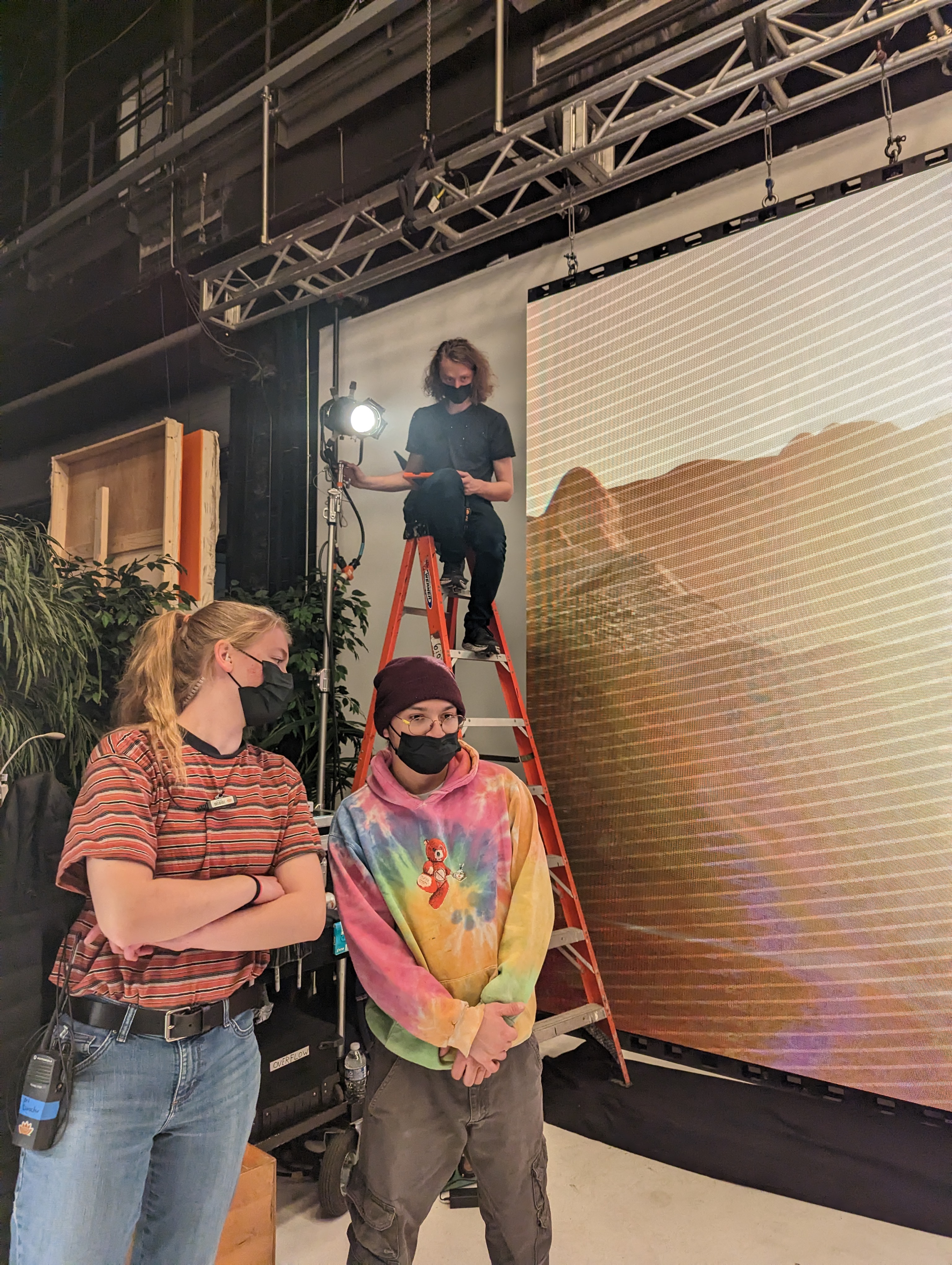 With SHOWRUNNER, someone can be up on a ladder adjusting barn doors while watching in real-time as their change takes effect.

How Will You Manage Lighting On Your Next Virtual Production Shoot?

Virtual production can help you create more fantastic worlds and push more boundaries on the same budget. You can control more things (like the sun), which allows you to control your schedule more than in an on-location shoot. But the workflow is massively different from a standard green screen shoot because visual effects are being captured by the camera, rather than added in later.

This means that physical lighting has to precisely match the virtual background—or the result will look fake in-camera. And that means lots of minor adjustments to dial in the perfect shot.

For the gaffers who've used SHOWRUNNER on major TV and film sets, being able to make those lighting adjustments from one app—seeing the results in real time—has been game-changing.