Jacob Fenn is embracing a new world of creativity

Fennworld's CORE online filmmaking course is—and will forever be—free. Founder Jacob Fenn wants aspiring photographers and filmmakers to know that, while a certain amount of budget and the ability to invest in equipment is helpful, anyone can start learning the basics of virtual production, or VP, with just an iPhone. SHOWRUNNER had the opportunity to talk with him about how FennWorld came to be, and what it's like to embrace the future of filmmaking.

On the cutting edge of education

Since the age of twelve, Jacob Fenn has loved being on the primary frontier of the film industry. He had the good fortune of befriending a neighbor who ran a production company and would invite him on set. This front-row seat introduced Fenn to an industry that would become his life's passion at a far younger age than most of his peers. Fenn knew early on he wanted to spend his life as either a filmmaker or an animator, but animation software was cost prohibitive at the time and to a teenager. That led Fenn to film school.

Fenn recalled film school as an enjoyable networking experience. "But as far as the practical application, one of my big frustrations was the things that I was learning at film school were things that I'd already learned long, long before, just by being on set," he noted.

Thus the question formed in Fenn's mind: How would one make film school practical? How could an educator prepare students for all that the film industry might throw at them?

Fenn became an adjunct professor at Utah Valley University (UVU) and used the position as an opportunity to try to help students in the ways he'd wished he'd been helped in school. Making film school as practical as possible sparked his interest in virtual production, and his own company's needs pushed him to fully embrace the new technology.

Realizing the need for virtual production

In 2020, Fenn and his team shot a project in West Africa. COVID testing was still very much a concern, causing a lot of stress for the team and the talent on the project. Fenn kept thinking about the emerging virtual production space and how much easier it would be to shoot the West African backgrounds in a studio.

At the time, virtual production was still a novelty, and equipment and technology costs were higher.

But for Fenn and the team, it became clear: the time for virtual production had arrived. So, he dove in, believing it was a risk worth taking.

"Any nascent technology always has a long teething period," Fenn reflected. "Because you're an early adopter, you're tasked with showing everybody else how to do it. But I'm glad that we've jumped in, because we've gotten a usable result quicker than I thought we would."

He then started bringing virtual production techniques to UVU students, helping them get ahead in their careers by setting them up with a knowledge of new technology and production possibilities.

"The time is here to be able to bring this to the masses," Fenn thought.

Like any new and still emerging technology, a filmmaker, director of photography (DP), or creative may hesitate to try an entirely new way of performing their craft. Fenn's advice to curious filmmakers is to lean into virtual production's strengths rather than trying to force traditional methodologies on a new way of working.

“If you have a DP that's used to shooting traditionally, this is not a traditional way of shooting and there's no way to sugarcoat that," he said. “And I think it's better to be honest about that. If you think you're just going to shoot traditionally in this environment, you just can't, right? You're still essentially shooting on a sort of a sound stage type environment, with more limitations on top of it. But lean into the things that you can do."

Working within virtual production frameworks will lead to better results and improve the process all around. Fenn also encourages filmmakers to embrace a hybrid approach to shooting. Rather than taking the myopic view that a film must be shot entirely traditionally or entirely with virtual production, Fenn recommends that filmmakers explore, experiment, and mix elements when different technologies are called for. And certain technologies, in particular, are fascinating to him.

“With the neural radiance fields, we finally are starting to see some new technologies that are getting the closest that we've ever been to light field technology," Fenn elaborated. “You combine that with VP, and you can go out on set and essentially shoot in some aspects similar to how you'd shoot in a LED volume. But it's an on-set production experience where you can capture depth. And you can potentially use that to integrate with some other 3D aspects."

Filmmakers can leverage new technology where it's the strongest while utilizing the other tried and true techniques they're familiar with, opening up worlds of potential for creative exploration. However, there's no reason to try to make VP work if that's not what a project calls for, according to Fenn. 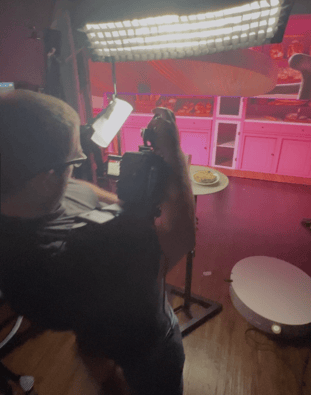 “Don't force VP just because it's cool, and if it's not working for you, don't take a subpar alternative when shooting practically would've been better." Fenn provides a specific example.

"Sometimes people don't have the tracking working correctly, or it'll be too expensive to do the whole 3D tracking system. So, they'll be on a stage that might be fully equipped with a really decent tracking system, but it's cheaper to just shoot with like a projected image background," he said. "But you could have done that in the fifties."

A depth of possibilities

Another element of virtual production that Fenn is most excited about—and eager to witness in his students—is the new range of depth that filmmakers can create.

“A lot of times people think it's just a wall with somebody in front of it," Fenn said. “But once you start to think like a good photographer, and really think of that Z axis, then there's so much you can do with the foreground. This is true even if you're on a budget and can't create set design elements with which the actors can interact."

The more expansive and open-minded filmmakers are willing to think, the more the world of virtual production will open up to them. And this includes new and exciting career possibilities, especially for filmmakers just starting out.

There are many routes to success for young filmmakers interested in virtual production. From technical expertise to 3D creation, Fenn encourages a new generation of filmmakers to become comfortable working in an ever-expanding field. For those who are naturally tech-minded, Fenn especially recommends embracing that path to VP.

“Some of the most exciting areas right now are the deeply technical ones. So if you've always wanted to be into filmmaking, but you're an introverted person, you may just want to sit in front of a computer and get into machine learning or radiance imaging," he explained.

AR and VR technology, too, is democratizing the industry. "If you're just a storyteller, and don't want to do all this techy stuff, watch for that opportune window where the technology's available enough that you can just use your webcam and scan yourself," he mused. "Or you can use a 3D object that's available and then just use the object recognition software and the skeletal tracking of the visual-based systems."

And for folks just beginning or worried about budget, there's a lot that folks can do with just an iPhone, without needing an expensive tracking system or LED wall. Fenn encourages filmmakers to play around with some iPhone apps and a green screen or plain white wall if they don't have other resources available. That alone can give someone a great introduction to virtual production, and allow creatives to produce stories they're proud of and excited by without needing to break the bank.

“I see these things students are doing and it really is so impressive compared to what you can do with a small team of people," he said. “[At FennWorld], we want to really lead the way and say, 'Here are ways that anybody has access to this technology to tell amazing stories.'"

And as VP continues to evolve and become accessible for more and more filmmakers, Fenn doesn't see the allure of it going away anytime soon. He's constantly inspired by what his team and his students create with these new parameters.

“Just seeing every little piece actually function together is such a magical thing," he said. “You get so lost in the technicality, and it's so rewarding to see the creative part come back. The return of creativity after much, much effort continues to be the most rewarding part."